THIS IS NOT A LOVE SONG 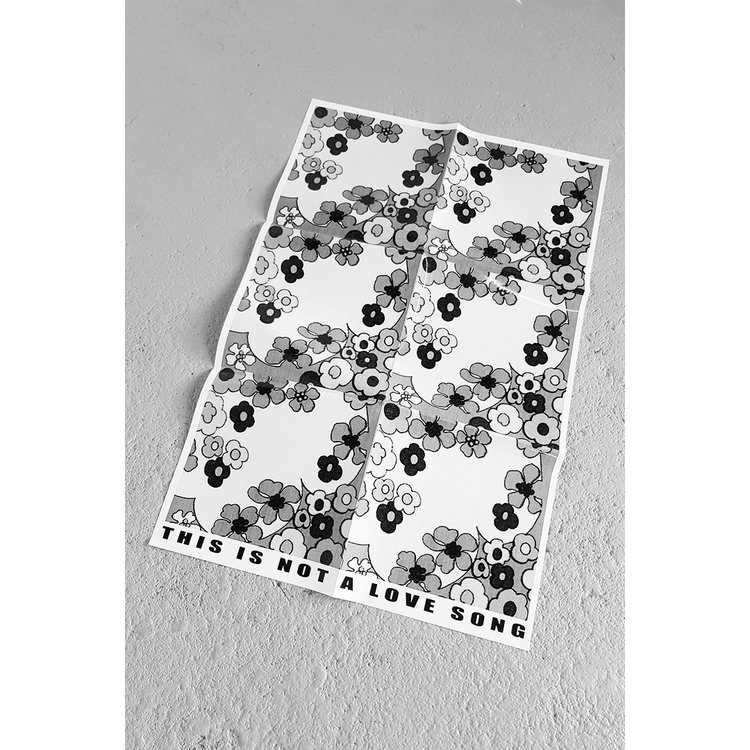 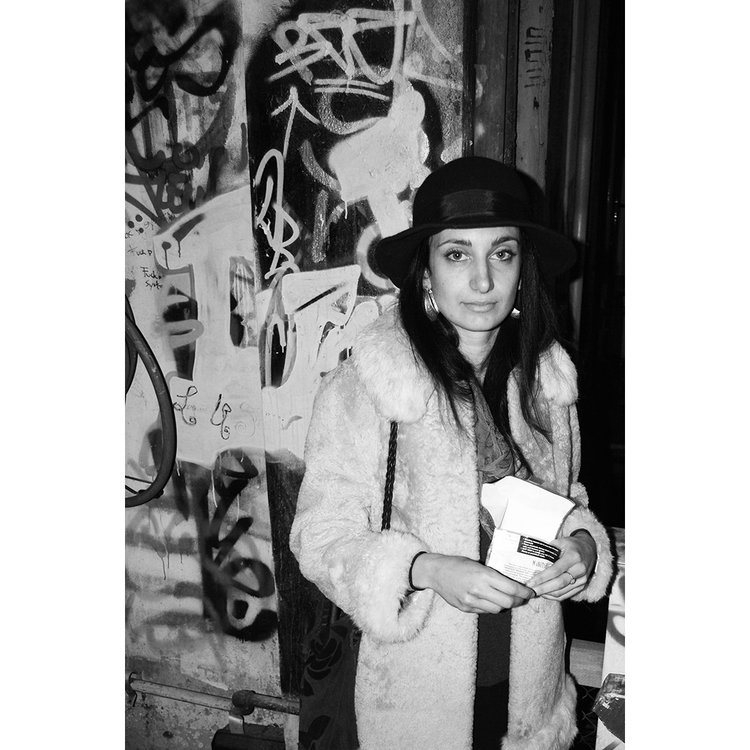 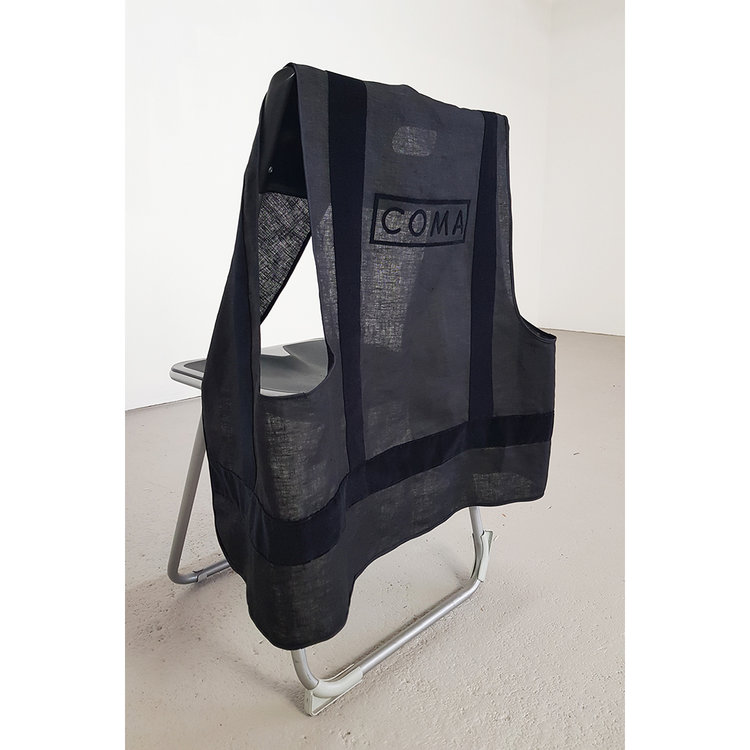 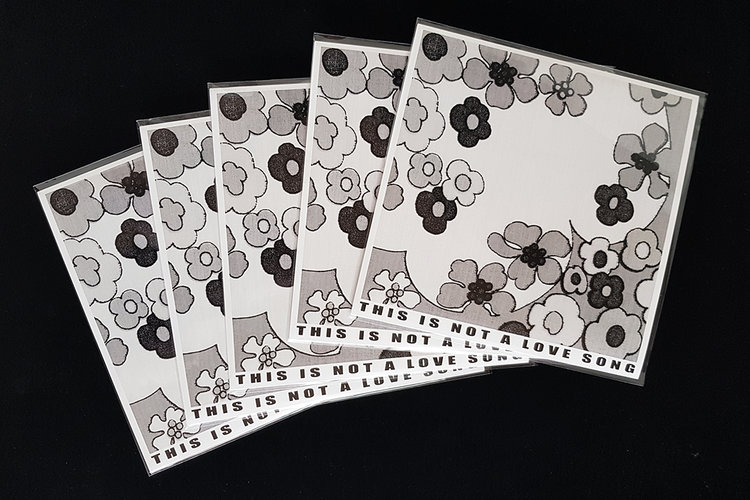 This Is Not A Love Song, 2019 Print Edition of 10. Duration 14:52 mins.
This Is Not A Love Song appropriates sound to study the ambience of privileged space. Joe and Chanelle focus their interest in labour types by bringing together the large scale of institutional architecture and the personal labour of the invigilator. Together with the minimal presentation of sound, they present their work on vinyl accompanied by a merchandising aesthetic of t-shirts and posters.
This exhibition is the opening act to the making of a Sound Archive of art institutions around the world beginning with a residency in Europe, commencing in concert with the exhibition. The archive localises locations remote to Australia and each other, consolidating them onto analogue vinyl records.
The series is informed by some Anticipations that critically approach the relationship between artist, viewer, and institution, to examine ideas of accessibility, permission, and labour.
Joe Wilson and Chanelle Collier use painting and substitutes for painting to explore the position of the image in relation to the viewing body. By incorporating unconventional materials and modes of display, they stimulate a semi-performative engagement with their exhibitions as a medium in itself. Expressing humour and absurd configurations within a diverse practice they frequently address the exchange value of labour by disrupting the vectors of artist, viewer, and gallery. 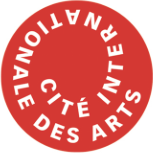 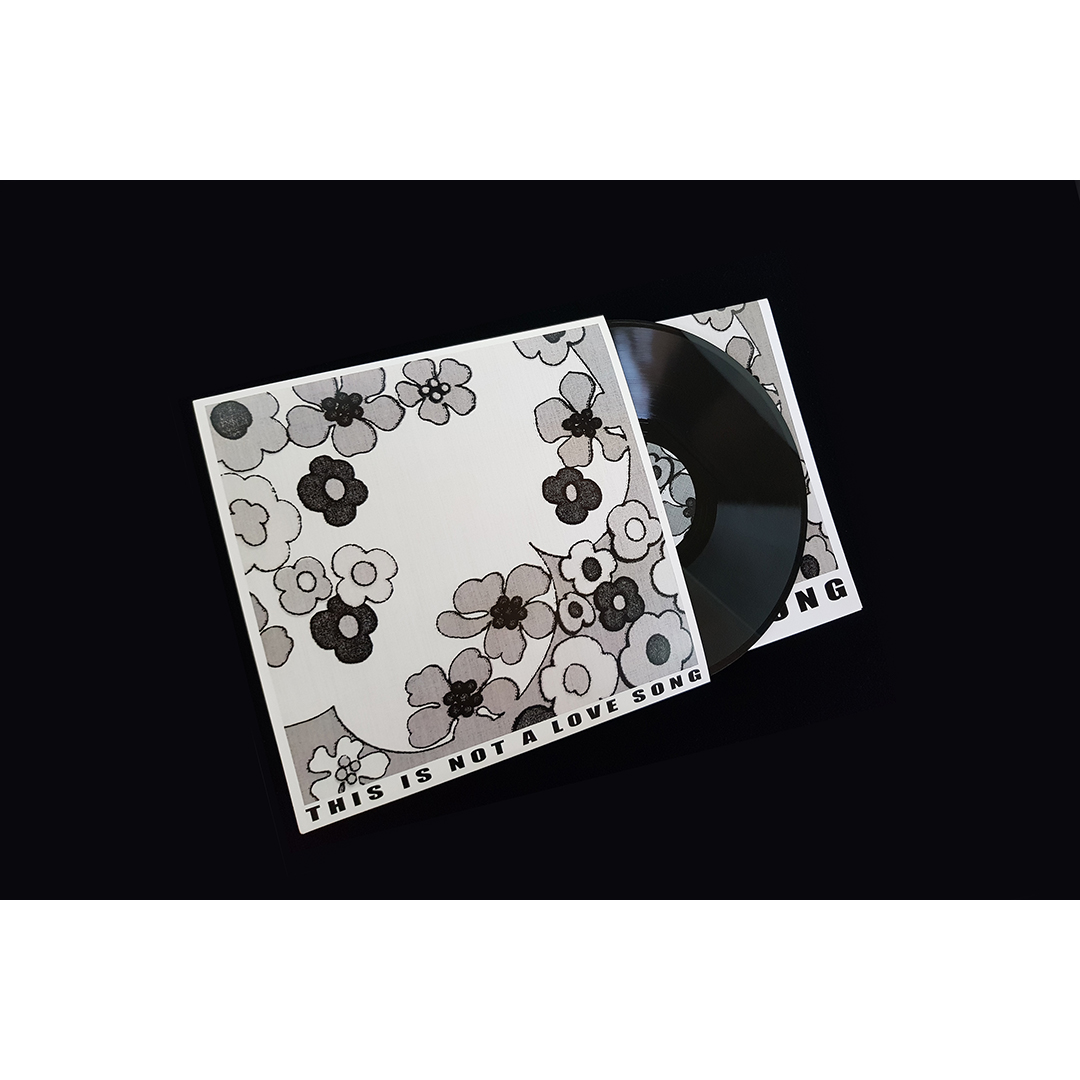 Print Edition of 10 on Vinyl, with Poster

THE VERY BEST OF - SERIES. 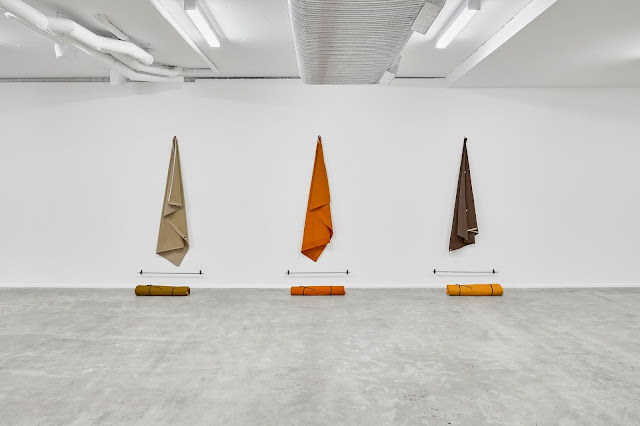 COMA GALLERY
137 Bayswater Rd. Rushcutters Bay, NSW,
Clara Ianni, Gabriel Rico, Joe Wilson & Chanelle Collier, Anna McMahon
13 July, 2018 - 3 August, 2018
Mrs. Spring Fragrance focuses on personal reactions and responses to cross cultural and physical movement. These responses may stem from a connection to one’s land and positive experiences in another, geo-political exploitation of cultural symbols and objects or contrasts in perception and acceptance of sexuality and gender differences in new locations. The title references a collection of short stories of the same name, written by Sui Sin Far and published in 1912, which details the struggles and triumphs of immigrant families in North America during the late 19th century.
Catalogue
Images courtesy of Coma Gallery 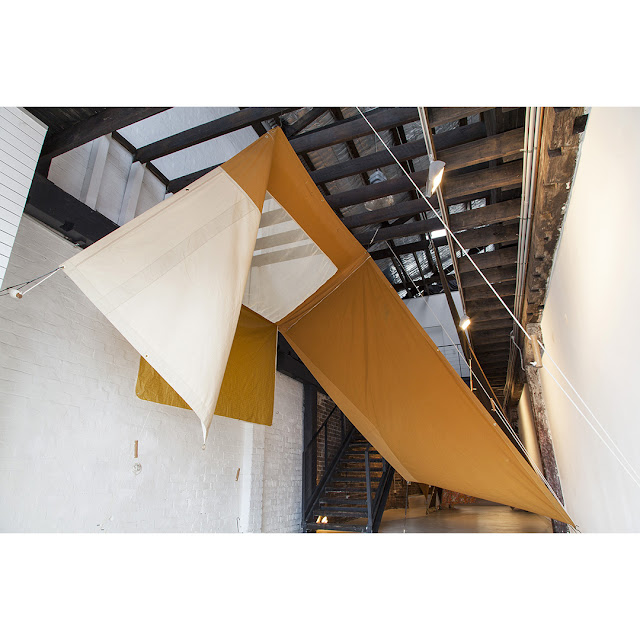 ARTICULATE PROJECTS
497 Parramatta rd. Leichhardt. NSW
Joe Wilson & Chanelle Collier
HANGOVER: Summer of ’68 is a new collaboration by Joe Wilson and Chanelle Collier featuring a large-scale installation in the downstairs gallery of Articulate Projects. Sections of vibrant canvas sewn into long panels and tied to the walls, the roof, and floor of the gallery, are made from vintage family sized tents. They form readymade compositions of line and colour referring to non-objective painting styles.
Thinking beyond the medium of paint and embracing the experimental model of exhibiting that is key to Articulate Projects, Wilson and Collier draw attention to the artwork as a social object. The material is refashioned from pioneer Andre Jamet’s French brand of tents from 1968. The year corresponds to both a peak in recreational camping activities as well as global civil rights protests including the revolutionary May ‘68 workers strikes in Paris.
As a cultural form with associations to urban escape and political resistance, the tents denote the polarities of camping and protest, freedom and hardship, nostalgia and destitution. Here it has been breached, opened up, and reconstructed where latent energy is held in the tension of fabric as effort that is stored in a battery-like capture of the kinetic energy used in the labour of its stretching and manipulation.
Hangover is the first of Articulate's Changing Place program, which focuses on whole-space installation to emphasise relationships between a work and its location.
Exhibition funded by Inner West Council, supported by Higher Ground Studios, and sponsored by Grifter Brewing Co.
Installation Photography: Anna Cuthill 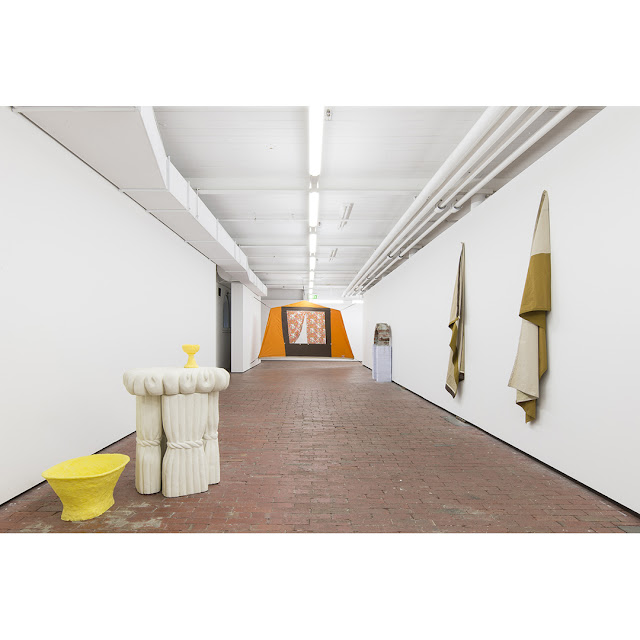 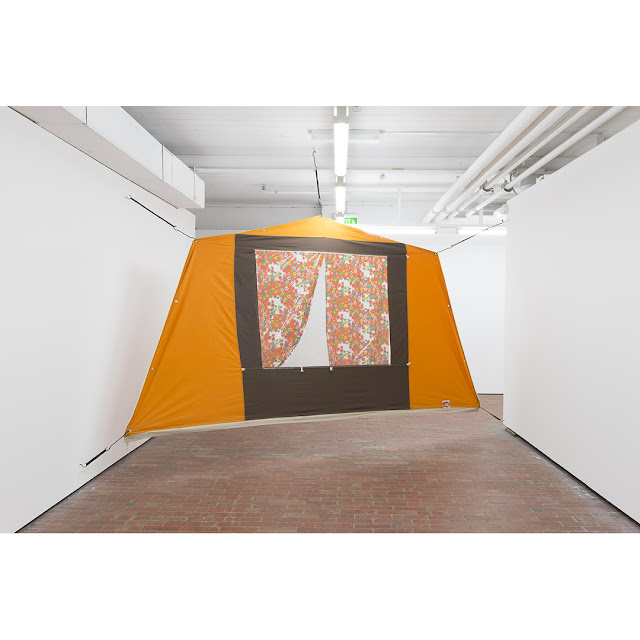 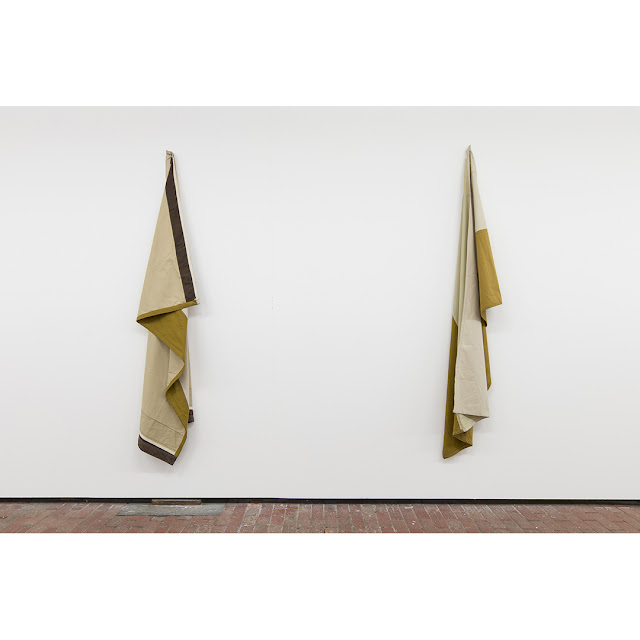 C3, Gallery 6
Abbortford Convent, Melbourne
Curated by Siobhan Sloper
Noriko Nakamura, Marko Radosavljevic, Chanelle Collier And Joe Wilson
The space between explores the abstraction of architectural ideas and forms. Each artist has used their differing and unique, cultural and visual histories as a lens through which to reinterpret the architecture of C3, Abbotsford Convent and interrogate the ways we shape, construct and personify our buildings and in turn how they shape us.
Installation photography: Aaron Christopher Rees 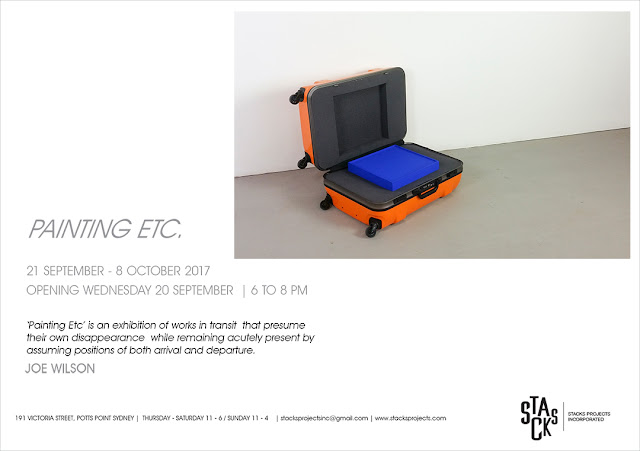 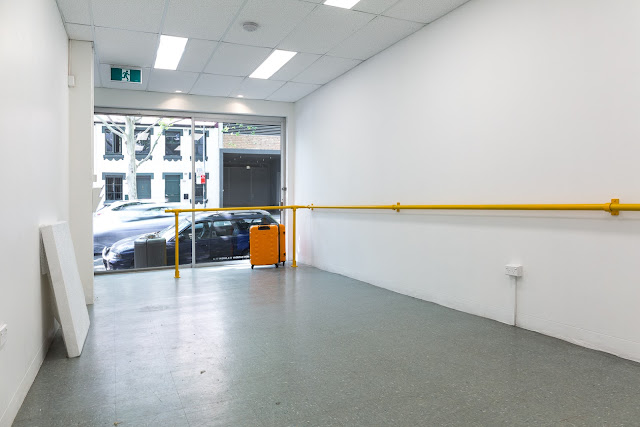 Victory & Thinker, 2017. Digital Collage
By Lisa Sharp
Painting has left the room.
So, what has happened when you go to an exhibition of paintings only to find that Painting has turned its back and left the room? This is a room you may find yourself in at one of Joe Wilson’s exhibitions and it is a provocative quandary when encountering his work. Left inside the room are a collection of objects that point to the absence of Painting, much as a recent departure from the stage of a Big Personality. There is a sense of having just missed the main act, tempered by a little uncertainty about the objects left scattered on stage. The end-of concert announcement ‘Elvis has left the building’ comes to mind.

In this room, the works tell of painting through its absence. They do this by adopting its familiar form, referencing formalism, and by utilising a pseudo-materiality that is filled with insight and humour. Carefully assembled is a collection of objects that are associated with and which indubitably point to painting. They point to the imprimatur of painting and not, as one might expect, the well-mined arenas of painting activity as inspired spiritual process, its medium as skill-based, its output as an aesthetically valued product for lengthy gazing upon. The material elements of painting are not present but are recognisable in their absence, through references, substitution and word play. For Joe Wilson lays bare, as if on a stage the entire set of conventions that surround an exhibition of paintings. A Wilson exhibition is a work site and the works are exhibited as moveable and transitory artefacts of the exhibition apparatus – the making, staging, crating, transport and installation of painting.

As a mere viewer you will be caught up in this staging, as your role in the gallery is assessed. Within the exhibition space of Painting etc., you may find that your entry is facilitated but your spectating can be confounded by the transitory narrative conveyed by the works. The shop-like window of the gallery displays a blue painting bespoke-packed in an orange suitcase. On entry,Hand, 2017, a hand-rail painted in safety yellow seems to escort, support and guide you in your viewing journey. Then you see paintings in various stages of installation – wrapped for travel, leaning on a wall, hung. Usually monochromes, they resist being seen again whenever they remain resolutely crated and unpacked. Occasionally mounted plinth-like on white pallets these works take on a monumental, if slightly absurdist quality. The packing pallet, with its irresistible homophonic reference to a painter’s palette is a recurring Wilson motif, and a gently satirical dig at the paraphernalia, the etcetera of painting, that is the subject of the exhibition.

Clearly at home in the gallery, and fluent in the non-objective vernacular, the works are clean-lined, restrained, well-crafted objects presented in an elegant and reductive vocabulary. You see timber frames, flat colours, monochromatic surfaces, geometric compositions, ready-mades and rectilinearity. It is familiar, and almost too well done. There is a tension in the room, and it’s a tension created from flawless execution undercut by absence. In a strange inversion of their objecthood, the works resemble – maybe even mimic – images, functioning as reflections, understudies and surrogates of painting. In doing so, the works take on the appearance, semblance, expectation, the simulacra of art, as if what we know and have come to expect of painting has been held up to a mirror, and reproduced.

Situating himself as a painter, Joe Wilson, who also works as an art installer and art school studio technician, is broadly concerned with “elements, situational and compositional, beyond the confines of the painter’s canvas”. Indeed his recent research for his Masters of Fine Art posited painting as Dislocated Object and examined Mobility and Transfer in the Presentation of Painting. And when painting is transient, on the move, or just passing through, then its absence becomes very much a concept explored within each exhibition. Absence is instigated, and then perpetuated by the works’ consideration of the marginalia of roles and agencies that take place behind and beyond the surface of painting. In talking to Joe, he elaborates on a theory he has about the object-image dichotomy, (a central tenet dating from the birth of non-objective painting), seeing it rather as an object-image collusion. This is a co-dependant relationship specific to our contemporary age of ubiquitous media, where the image can not only extend the reach of the object, but also become a work in its own right.

Another instance of painting turning its back on a room was Wilson’s earlier exhibition Verso (February 2017, Rayner Hoff Space, National Art School). A verso is a technical term for the reverse side of a painting and in considering painting’s verso we are looking at its back. In that show, the physical site had been renovated to preserve multiple layers of the building’s prosaically utilitarian use, and this facilitated the presentation of painting’s absence in utilitarian disguise. A dolly, a ramp, crates, ladders and flights of steps were interwoven with the presentation of paintings on the walls, suggesting movement, transition and production. In several works, with disarming conceptual perspicacity, Wilson uses chroma-key paint as well as textiles as canvas. A chroma-key is not only a ready-made colour monochrome but a blue / green colour keyed to ‘disappear’ digitally,

The use of a disappearing colour for an exhibition of absent paintings recalls a tale from early painting mythology. The ancient Greek myth of Zeuxis and Parrhasios had two renowned painters in a contest. While Zeuxis produced a painting superior in illusion (birds flew down to taste the painted grapes) it was Parrrhasios who won, for his painting of a curtain which had deceived everyone. The point of the story was not that the curtain was particularly well painted, but that the viewers didn’t see it as painting because they didn’t expect to see it. Instead, the viewers placed all their hope and anticipation in painting that was not there, but was absent.

Ladies and Gentlemen: Painting has left the building. Thank you and goodnight. 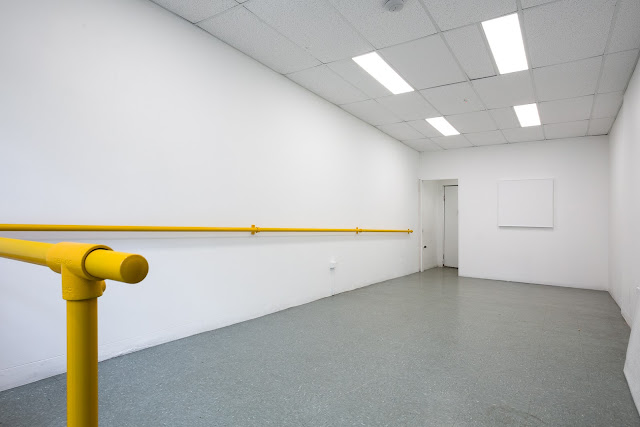 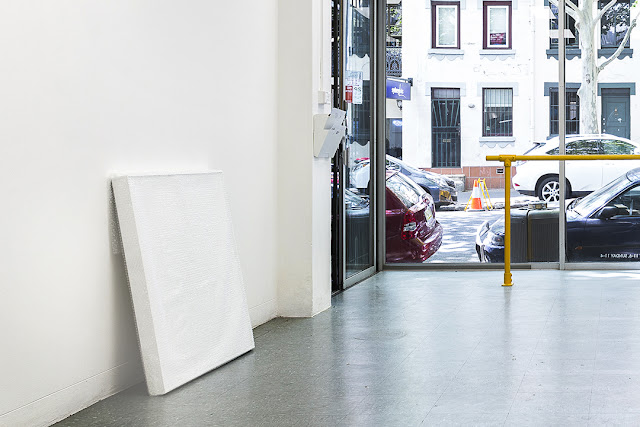 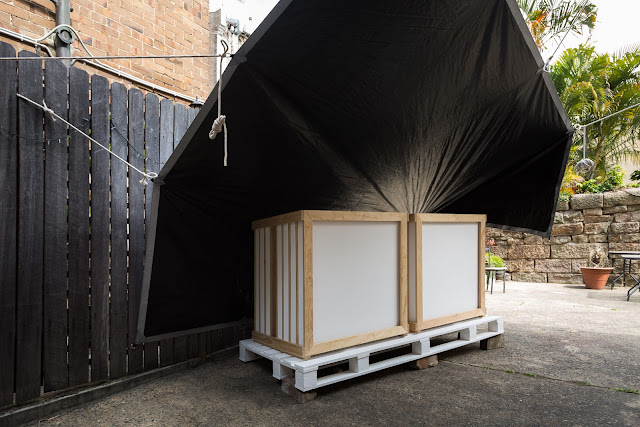 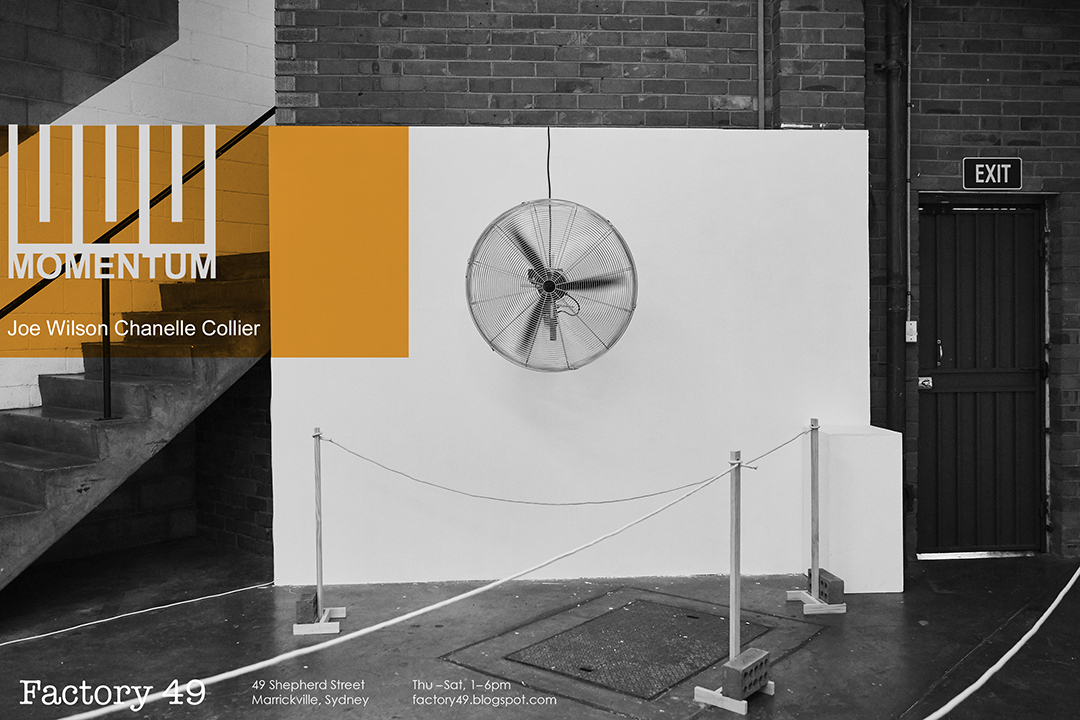 Barriers and driving forces guide a haptic encounter in Joe Wilson and Chanelle Collier’s fourth collaboration. Spatial and kinetic forms emphasise the authority of signs to instruct the position of persons or objects. The exhibition self-references its own event by taking on a quasi-theatrical tone and a parody of objects within and without the gallery space. Making use of the readymade in consideration of Painting, combined with automatic forms of labour, Momentum is an exhibition of new works that produce signals of position. 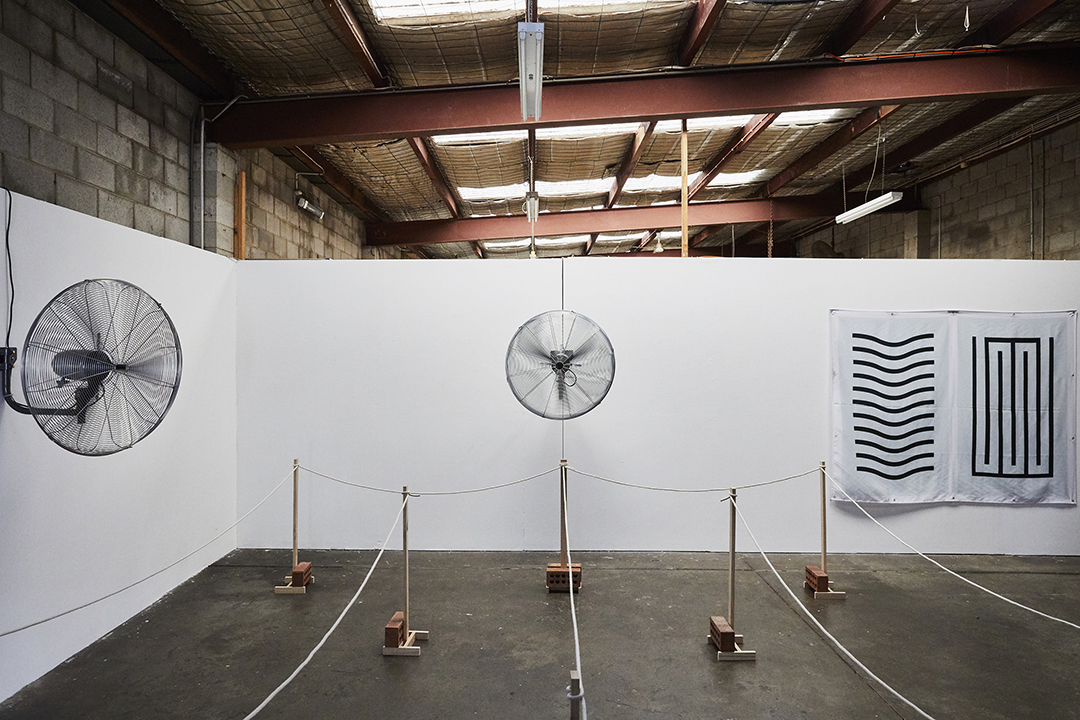 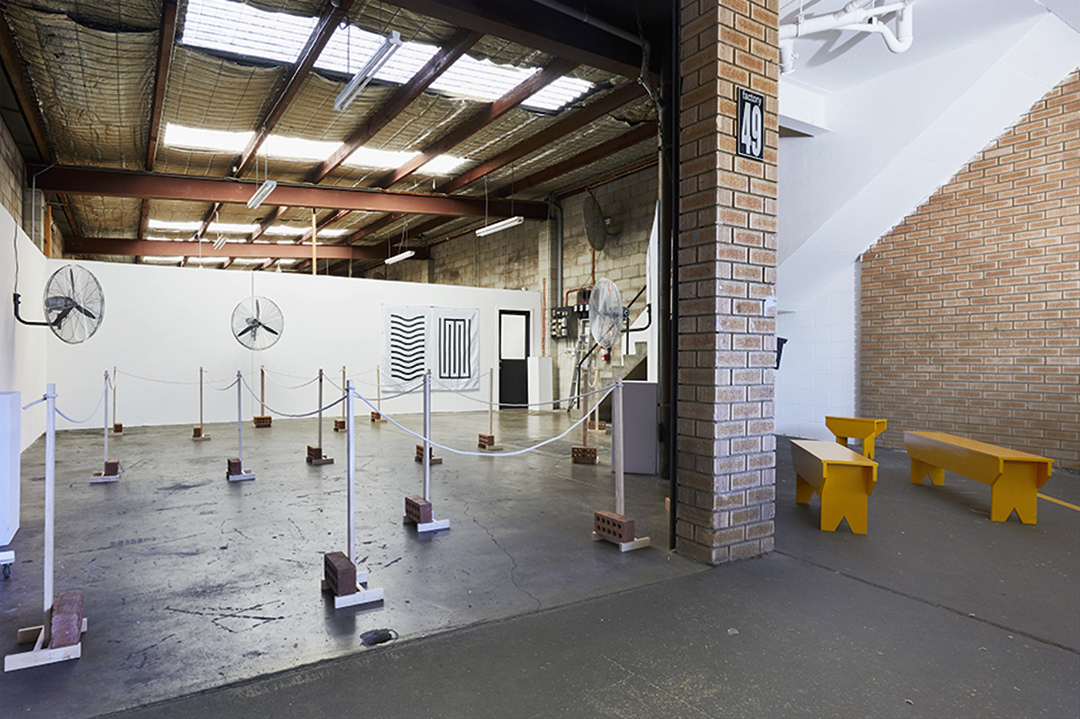 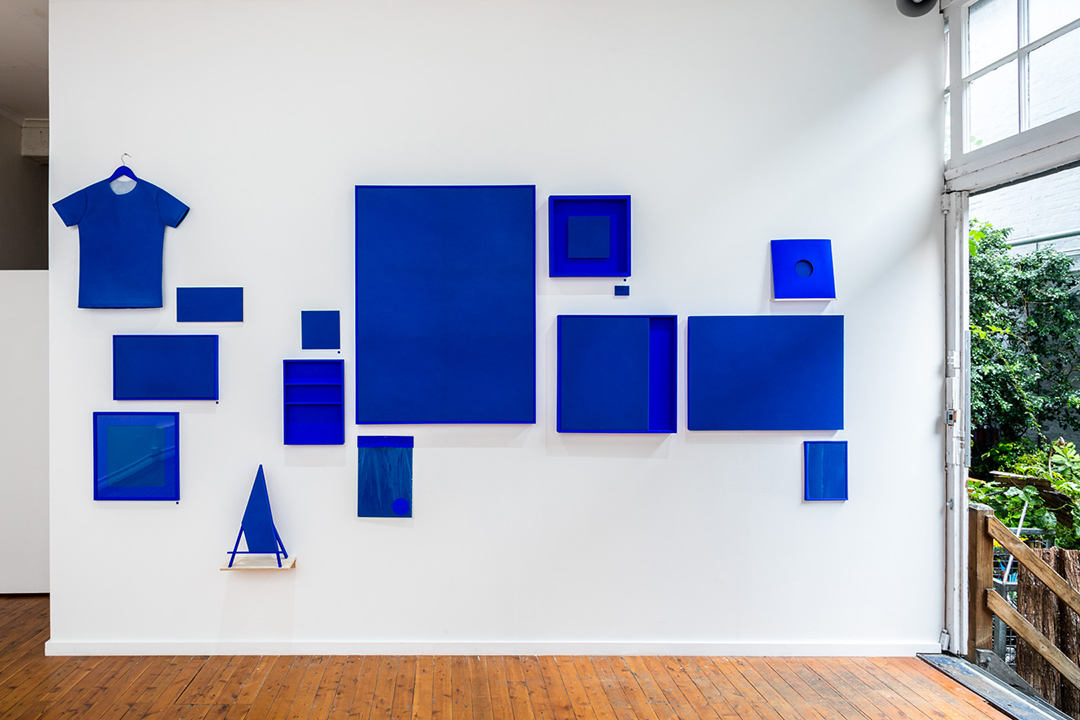 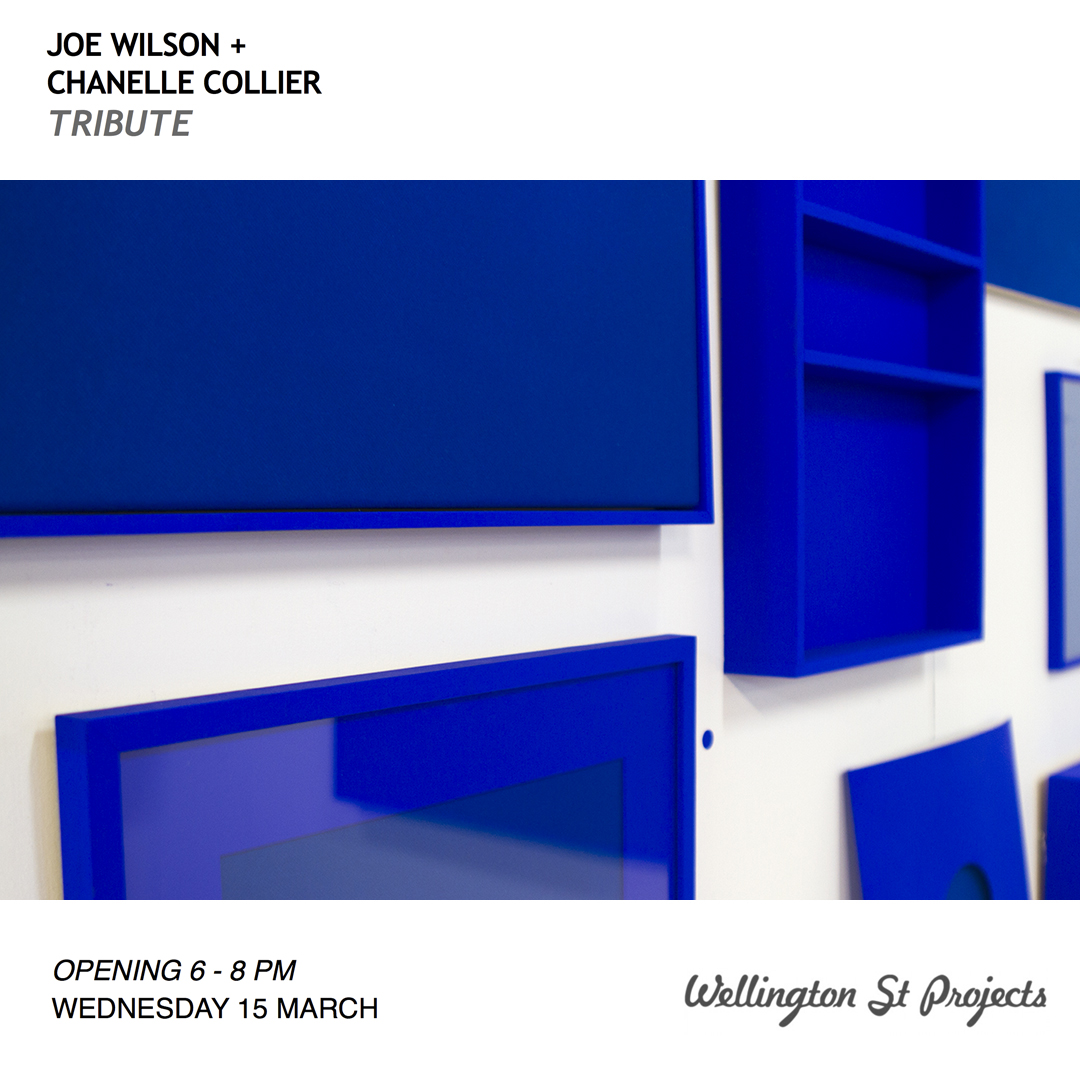 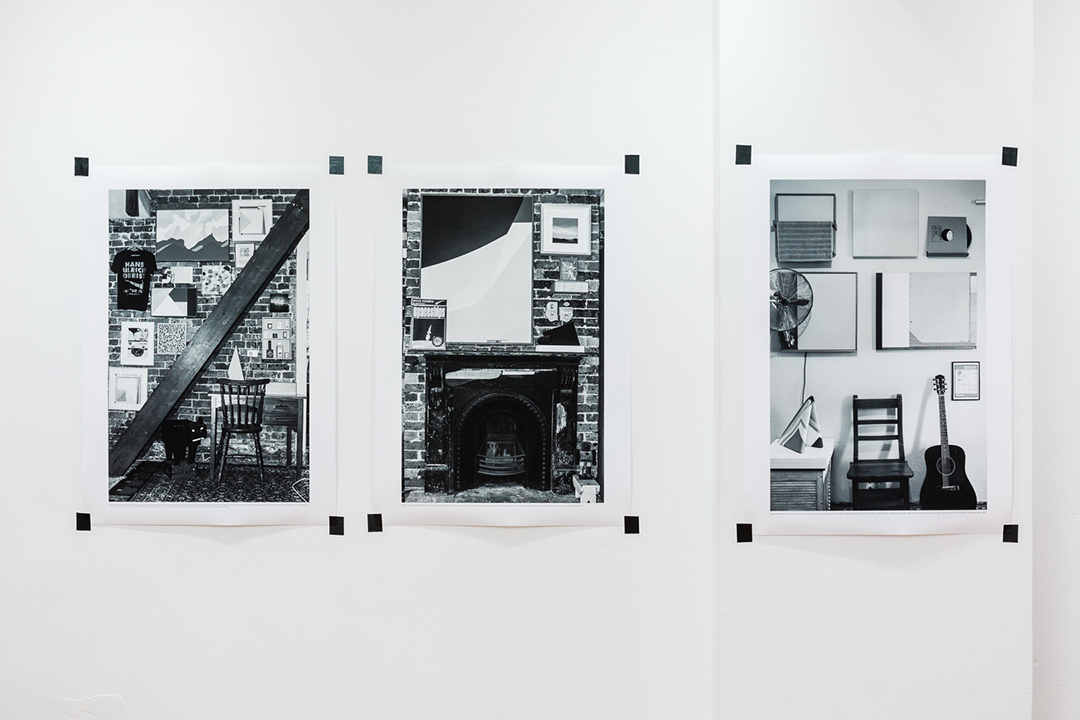 Tribute is our third collaborative project and continues to develop a combined practice investigating the contingent dynamics of networks that are social and situational.

The works in this exhibition are all modelled after selected works from our own collection, mostly comprised of local artists with whose work and practice we are familiar. The works titled Tribute or After take the structure of their namesakes and are made to celebrate the work of our peers and influences. In each piece the artist’s signature hand is removed, leaving a blank chroma-key stand-in as a physical tribute to the work that came before it, offered as a gift to the original creator.

We seek to mindfully engage the inherent authorisation and agency that comes of building a collection of art; and to navigate the shifts in identity-roles between collector, curator and artist. Through the presentation of stand-in works, and images of works in situ at home, this exhibition attempts to re-locate artworks set adrift, and to draw attention back to their originality while simultaneously expressing concepts and practice of our own making. 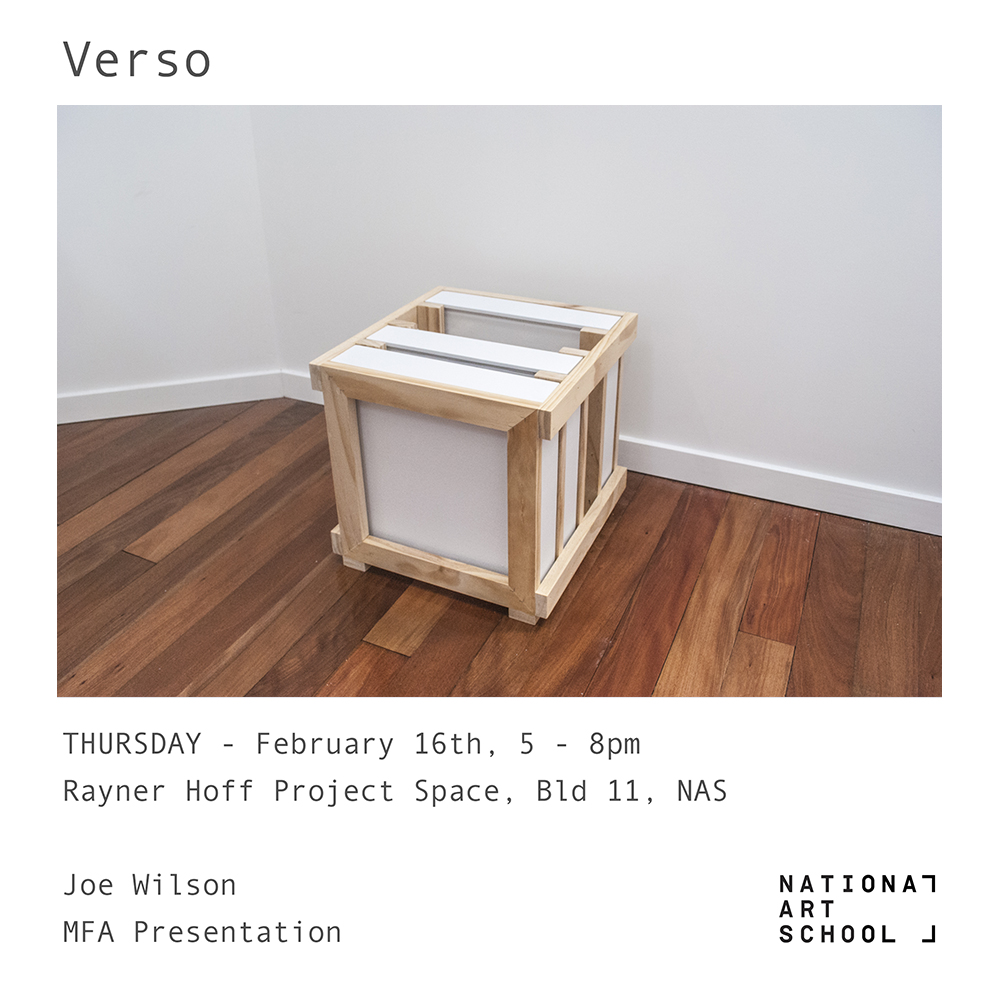